What Are Different Generations Of Honda Civic - Certified Used Honda? 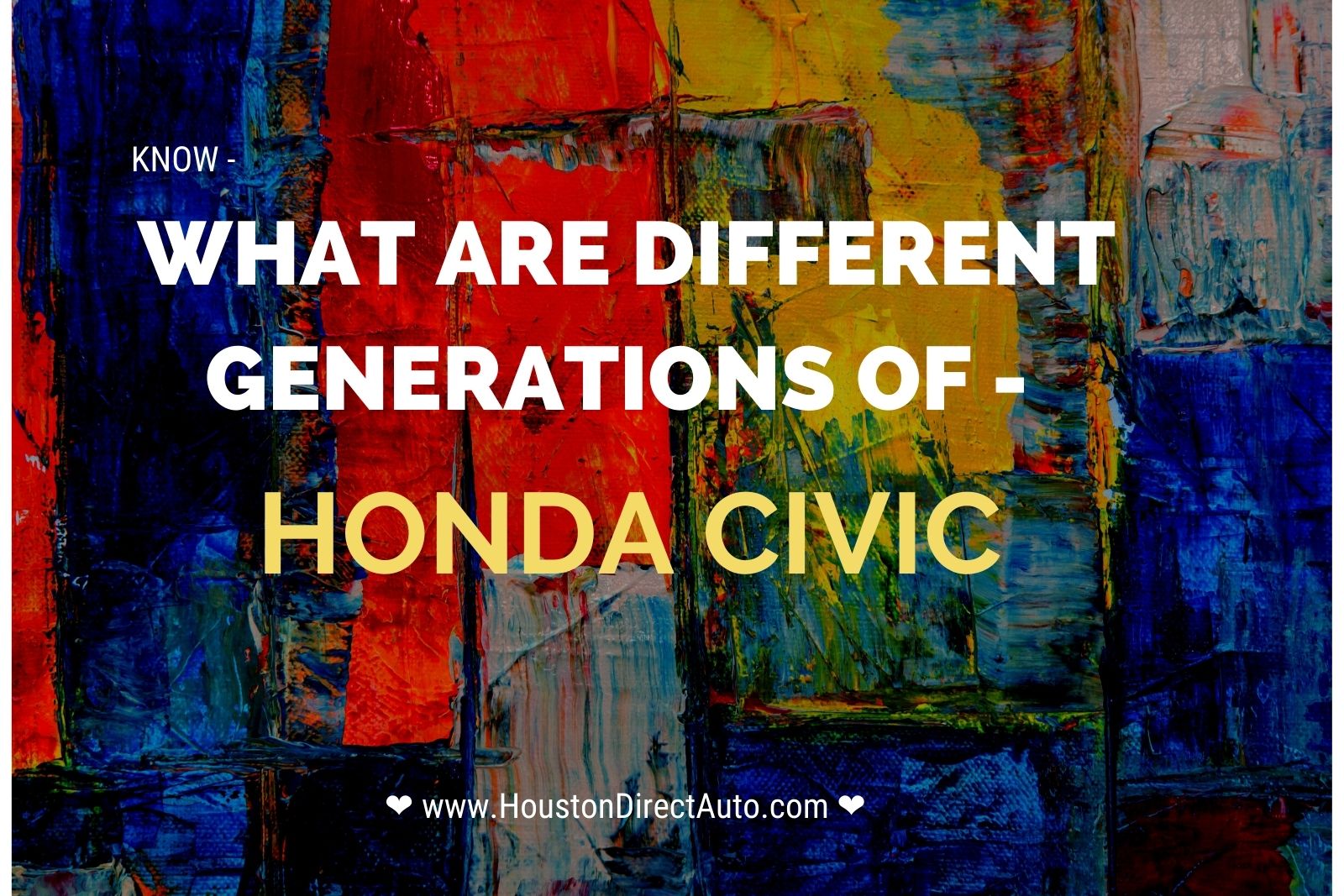 From new car drivers to automotive enthusiasts, everyone recognized the presence of the Honda Civic in America. It is a well-equipped, sporty, and dependable car which is also recognized as the topmost used car on the automobile market. Although, it has a shared history of many decades, so you should find which generation of Honda Civic is right for you.

In the year 1973, the Honda Civic was released first on the market. The first generation of Civic was made to offer a powerful engine and an efficient performance for drivers across the nation. And in 1975, it also introduced a wagon option to add more versatility and cargo space. Generally, the first six generations of Civic covered the market for the new & used models of this amazing vehicle. Along with fuel-efficient technologies, high-end features, and powerful engine options, the sedan continued to adapt to the ever-changing needs of drivers across the United States. It would always be a dependable ride regardless of which early generation of Used Honda For Sale In Houston TX you choose.

Some Modern Generation of Honda Civic –

The seventh-generation marked a new era for the industry. It comes in the market with an entirely new design in the year 2001. Also, it has an updated suspension for a smoother ride. It also pumped out more power with a 117-horsepower 1.7L engine. In the year 2002, the Honda Civic comes equipped with a Continuously Variable Transmission (CVT) for smoother shifts and a greener overall performance. Plus, this generation also saw the debut of the Honda Civic Hybrid too. The sedan also came with some advanced features which included an upgraded stereo with MP3 capabilities, so you can listen out to all your favorite playlists when you’re behind the wheel.

In the year 2006, people saw a more innovative age for the Honda Civic with its eighth generation. With a sleeker look, this generation offers numerous trims as well as a strong performance. Also, it featured a 140-horsepower engine. For people who want more power, some model years in the eighth generation came equipped with a 2.0L 4-cylinder engine which produces up to 197 horsepower. The Honda Civic Hybrid also gets an upgrade for this generation. It became the go-to for all commuters seeking a more fuel-efficient performance.

Generally, the Honda Civic models launched between 2012 and 2015 were a part of the ninth generation. With this generation, it became the topmost choice of Americans by offering a more compact structure and modern amenities. Moreover, several model years of Civic were praised by many enthusiasts for their spacious and luxurious interiors. Some of the mind-blowing features you can get with a ninth-generation Civic are Bluetooth connectivity, Rearview camera with guidelines, Display Audio infotainment system etc. Moreover, it also comes equipped with Honda LaneWatch, which displays a live feed of the passenger-side lane to help you in getting a better idea of when it’s safe to switch lanes.

The tenth-generation of the Honda Civic is one of the most advanced generations in its history. It introduces everything from driver-assist technologies to smartphone integration systems to keep drivers even more connected than ever before – Honda Dealership Used Cars In Houston TX. Also, the tenth-generation marks another new era for the Civic with a sleeker, bolder, and sportier design. Not only is it eye-catching, but it also offers high-end technologies. With aerodynamic engineering, it makes your commutes more efficient as well.

This is some crucial information you should know before considering a used Honda Civic in Texas. Also, you will easily find that the model of Civic you’re considering is right for you or not. If you’re searching for a Certified Used Honda In Houston TX, you should stop-by Houston Direct Auto today! Here, we have plenty of used cars that you can buy with 12+ in-house financing options. Moreover, we also provide limited warranties and a free CARFAX vehicle history report to build up your confidence. For more queries, feel free to contact us today !!