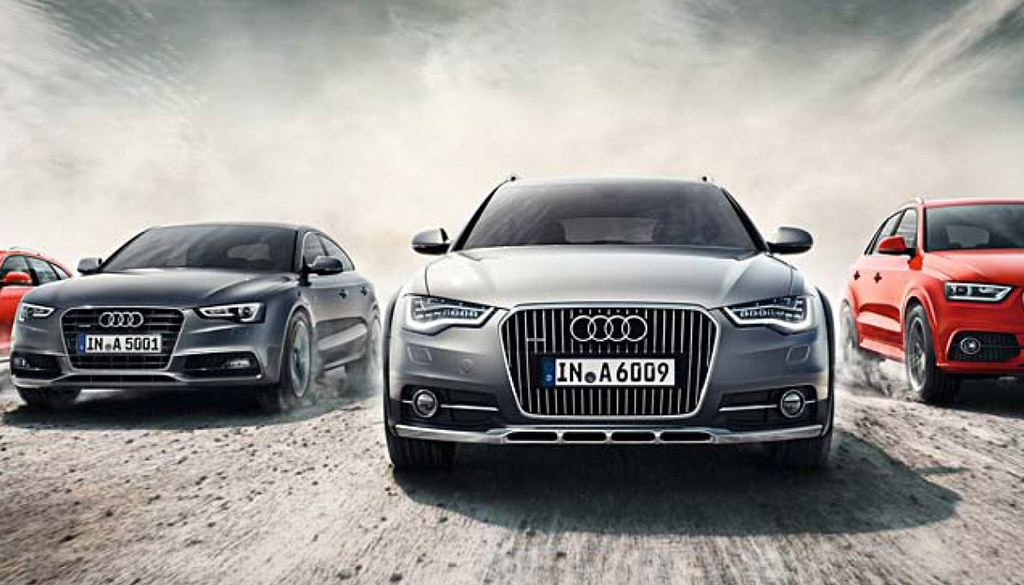 Audi is an Ingolstadt-based German luxury car manufacturer owned by Volkswagen which blends high technology with solid performance and styling. Audi is one of the three best luxury car-makers in the world and before they built the sophisticated and elegant luxury performance vehicles on the road today, they built a rich history of innovation that revolutionized the automobile industry. The name of the Audi dates from 1910. In 1969, Volkswagen consolidated several businesses into the modern “Audi.” With the four-wheel drive rally champion Audi Quattro in the early 1980s, Audi made its name in motorsport. It was first introduced to the United States market in 1970 and has long enjoyed a reputation for making exciting, sporty cars that compete in and win rally races, and also make daily driving an absolute pleasure.

Audi has a line of vehicles that meets all needs, sizes, opinions price ranges and styles.  Below is a list of Audi vehicles that have been the top-selling model of Audi.

Audi Q5 commands the buyer’s attention with its formidable set of features and with all the right things at the right places. Sporty yet sharp exterior and the robustness, state of the art 3.0l TDI 2967cc engine and the ease of handling this giant of a machine make it a favorite among car lovers. It was No. 1 among luxury compact SUVs when it came out in 2013 with its typical nimble handling with comfortable seating for five, tri-zone climate controls, and 40/20/40 split-folding rear seats

Audi A3 Cabriolet looks incredibly appealing and makes an excellent city ride. IT has consistently been one of the most well-rounded models in the entry-level luxury car segment. Owing to its appealing blend of style, performance and creature comforts, when it comes tol convertibles, the A3 is a great choice.

Audi A6 is incredibly easy to handle and smooth to drive, which is uncanny for a sedan of its size. In terms of styling and quality of its interior, along with the AWD (All Wheel Drive) A6 excels slightly above its competitors. It is a muscular, athletic enthusiast’s car with a luxurious interior, good fuel economy and some of the best safety scores in its class.

The sportscar world was very surprised when Audi presented the first-generation R8. Nobody expected such a bold move from Audi and such a great sports car. The Audi R8 is a supercar with its mid-mounted V10 engine and design but at sports car prices starting msrp of $169k. It is a mid-engine, 2-seater sports car which uses Audi’s trademark quattro permanent all-wheel drive system, and is based on Lamborghini Huracan platform.

Currently, Audi Q7 is one of the most luxuries SUVs in the market. And mind you, Audi has gone an extra mile to put equal emphasis on making the car “the best”, ”luxurious” and an “SUV”. Goes without saying, the car seamlessly binds the cool look on the outside with the smoother than smooth off-roading experience. Without saying, Audi Q7 is loved by many drivers

Apart from the ones mentioned above, many other Audi vehicles have been sold in great numbers and loved by the masses. Audi Pre Owned has its own charm. A strong design identity, an impeccable racing pedigree and use of cutting edge technology in its cars have made it one of the most valued and renowned car makers in the world. If you wish to own Audi at an affordable price, you can always consider buying a used Audi. Here you will find an amazing selection of

Audi For Sale Near Me

Please check out used Audi vehicles in our inventory at www.houstondirectauto.com