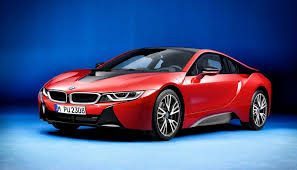 Supercar and Super-efficient. The BMW i8 Coupe

German multinational company  ‘Bayerische Motoren Werke AG’ or as called in English, ‘Bavarian Motor Works’ (BMW)  is one of the world’s most renowned and respected luxury and super performance car makers. Along with Audi (Audi Cars For Sale) and Mercedes-Benz, the BMW is part of the ‘German Big-3’ luxury automakers, which are the three best-selling automakers in the world.

BMW started producing cars in 1928 and 100 years later it is still making a way not just for innovation but revolution and still making iconic, prestigious models that are driven by business executives and families alike.

One such BMW manufactured car that often tends to take peoples breath away is the stunning, powerful, fast, furious, dope, mean-looking – BMW  i8 Coupe.The ‘BMW I’ is a sub-brand of BMW that was founded with an aim to design and produce plug-in electric vehicles. The i8 is a plug-in hybrid, launched in June 2014. Plug-in hybrid cars are an evolution of ‘Hybrid Electric Vehicles’ where the battery can be charged by regenerative braking or by plugging it into a charger/wall socket.

Some Features and Specifications

i8 is an incredible piece of engineering by BMW. With all its impressive specifications the BMW i8 is currently one of the most awarded cars in the world. However, as with all supercars, this supercar is also super expensive with the MSRP (Manufacturer Suggested Retail Price) starting at $150,000 (approx) with the leasing option around $1060/Month. Unless that is something you can afford, a used BMW i8 from a used car dealership would be a better choice, after all, who wouldn’t love to get more for less.

BMW i8 models on average depreciate 42 percent in the first three years when new. So expect the price of a used BMW i8 to be somewhere between $80k to $90k. With a few more years and numbers on the odometer, and with newer models coming out you can expect another 10% to 15% drop which could bring the price further down to almost half of its original price. The final price figure could still make your teeth clench, but if you are able to afford it, then carefully plan your budget, find a good reliable used dealership (www.houstondirectauto.com) and get ready to take home that stunning looking vehicle that is universally admired and respected, for its world-class combination of performance, efficiency, and beauty.