9 Used Cars That Will Last a Decade or More 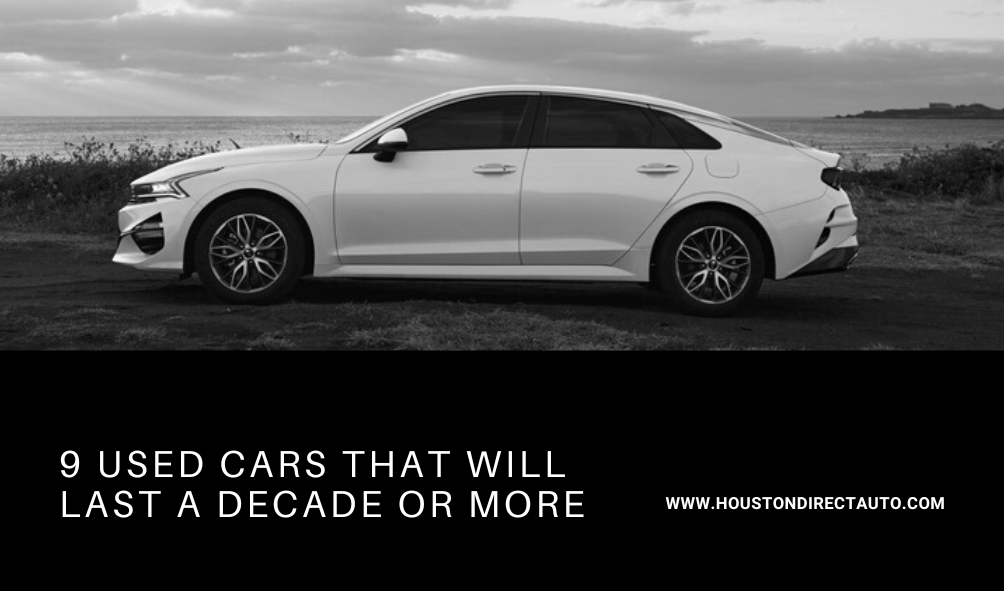 Getting into a new car is one of the best experiences for a gearhead, and this year gave us so many choices to choose from. The body is gleaming and the seats are so soft. The steering is smooth. It’s just such an exhilarating feeling. If we follow this lead and try to put ourselves in other people’s shoes, this will probably seem even worse. High-quality cars are so expensive, they often need to be financed, they come with warranties that only last a few years, and they carry high monthly payments.

Buying a new car has benefits, but the benefits of buying a used car more often outweigh the detriments. Here are some well-made cars that you can rely on for a decade or more and avoid future hassles.

Purchasing used vehicles can be a smart move for many car buyers. They can save money and the cars don’t necessarily last as long as new ones. Low mileage and newer used vehicles can last just as long as brand-new ones, but depreciation usually hits them hard. Monthly payments are generally lower because the cost is lower, and they can feel very close to brand new if well-maintained and thoroughly cleaned. Used cars offer good value for their money, and that’s exactly what buyers are looking for. They can last for a long time without needing to shell out a lot of cash.

The Ford F-150 is another reliable vehicle. F-150s and Silverados have both been staples in the truck world for around half a century, and they are still the most popular trucks in America. Here are our top picks.

The Civic was always held back from being at the top of the industry because of its lacklustre styling and poorly-made interior. Now, with improvements like superior design and state-of-the-art engineering, there’s not a better car on the market. Since cars lose value very quickly, many models can be found all over the used car market for a great price. Even lease return cars can be purchased for nearly half the price they were originally purchased for. Well-known for being reliable in the car industry, people that own these cars can expect them to go for over 200,000 miles.

Used Acura TL vehicles sometimes go overlooked when you’re looking for a used car. These cars also have a following among enthusiasts since they have a sportier appearance, but not always the power to back that up. Although there may be outliers, most owners have reported that their cars have lasted over 230,000 miles without any type of issues. Although they can be difficult to locate, they are still widely available.

With all the different engine types that Honda manufactures, it’s not too much of a surprise that their car engines are of a very high quality. One of the best selling cars in America, the Accord, owes its fame to that. They’ve got sporty appearances, sleek handling, a comfy ride, high fuel economy, and a reputation for longevity. In most respects, they’re seen as the best all-around cars out there with a winning combination of practicality, value, and reliability. As they have been manufacturing these tires for such a long time, they can be easily obtained for a reasonable cost.

In the beginning, the Kia Optima was not a great vehicle to drive. It was underpowered, and everything appeared to be put together separately. Since the Kia Optima received major upgrades in 2010, it has become one of the best-driving sedans in its class. They are also highly fuel-efficient, have a turbocharged engine option, and have the industry’s best warranty. The Kia K5 is a fun, sporty, reliable car from the Kia family.

A four-door sports car, the Nissan Maxima, is not held back by much other than the fact that it has a CVT transmission, which enthusiasts dislike.

Some of the pictured body styles can be found for very affordable prices, but the best deals are around the 2015 model year, especially lease returns with lower miles. Their powerful engines, comfortable rides, modern-looking interiors, and decent gas mileage make them worth considering.

The Toyota Camry is the sixth best-selling car in the United States, but it was once the number one car. It’s the most affordable sedan in its class, and you can find used models almost anywhere, even low mileage ones for under $10,000. Older used examples are easy to find, and maintenance costs are low. They’re comfortable, their interiors are well-designed, and they’re fuel-efficient. You won’t find many cars that match their reliability and cost-of-ownership, meaning you’ll get a bulletproof car.

Compared to a traditional sedan, the storage space on the Subaru Outback is significantly more with the wagon body style. It’s not to be understated as the most practical car in its segment. Body style has gained a small following, particularly in some automobile groups. It’s much like the Legacy in most ways, offering Subaru’s popular four-wheel-drive system, modest gas mileage, a modern interior, and decent reliability. There are lots of these cars in the used market, and many of them cost under $10,000. Perfect for someone who likes long road trips!

In some ways, this truck differs from the Silverado and F-150 even though they’re both full-size trucks. Though it doesn’t tow quite as much as the other two, it makes up for it in fuel economy and looks.

Tundra’s interior isn’t quite as nice as its American competitors, but it costs less and comes with Toyota’s proven reliability. We’ve done extensive research to ensure you make an informed decision on one of these.

It is the car that holds the Guinness World Record for most miles driven in a single vehicle that can survive for 10 years at least. 3.2 million miles on his red 1966 Volvo P1800, probably one of the most beautiful cars ever made. There are no official reliability ratings for this car, but we think the fact that it’s such an incredibly prestigious record holder speaks for itself. The Volvo P1800 has revived in the last few years, built by Cyan Racing in a stunning blue.